Well, at first you should ask yourself where you would like to be and what fascinates you.

Do you like Europe? The medieval age? The charming France? The Indian culture? The Spanish dances? The latin world? The Italian food? The American culture? The Roman Empire? The Russian monuments? The Incas? Astecas? Mayas? Stonehenge? The Egypt Empire? The Old Greece? The Japanese technology and traditions? The Ex-U.S.S.R. countries? The house of the Dracula in Romania? The British, German, Belgian, Austrian, Denish, Swiss, Swedish, Portuguese culture? The Brazilian people?
America, Europe, Asia, Africa or Oceania first?

Of course you can not see everything at the same time! Let’s go step by step. I chose Western Europe as my first big trip and I traveled throughout 12 countries.

Check out the planes avaiability, the airports nearby, the transportation to the city. Look out for good prices, tickets on sale and for sure, the best season to go to your dreaming destination taking into consideration your budget, local climate, your vacation time, duration of the trip, stuffs like that!

Time to see how you will go from one city to another. By plane, train, bus, car, bike?

I have some lists of cheap and good airline and train companies that I will wrote down in other posts here in my blog. I myself chose to go using EuRail Global Pass (free trains for 1 month), I think now there are 17 countries that you can go by EuRail (for non-European people) or InterRail (for non-European).

Next step: where to stay. Hotel? Hostel? Couchsurfing?

I “couchsurfed” around everytime it was possible, translating, everytime there was a host available for hosting me. I saved like 1000,- Euros couchsurfing instead of being in hotels or hostels. But sometime having your own bed in a hotel is important!

You can find people from CS (Couchsurfing) just for meeting up, they are fun and you can have a great time! Another tip is the Red T-shirt guided Tour, where you also find nice people and join them for a walk guided tour made by a guy or a girl wearing a red t-shirt! It is not that expensive and you will see a lot of the city! I wrote about it here.

I went to Europe to work for technical experience in my area (I study Pharmacy) in a laboratory for 3 months. The internship I did is called IAESTE (International Association for the Exchange of Students), which I talked about in these posts:

After the time I worked I started my backpacking alone.

What to carry inside your backpack?

What to carry inside your backpack 2?

I hope you have a clearer idea about backpacking, internships and couchsurfing. 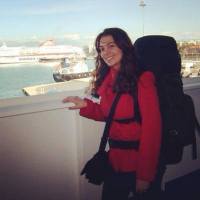